Transit of Venus Photos from Tahoe

Astronomers around the world looked to the sky tonight to observe Venus as it passed across the face of the Sun for the last time this century making the viewing the The Transit of Venus a once in a lifetime event, so naturally I was compelled to photograph the celestial occasion.

Since it’s not safe to look directly at the sun, the Venus Transit must be viewed with a safe solar viewing device or using the projection method. I opted to use the same type of budget homemade camera lens filter to shoot pictures of the transit of Venus that I used to photograph the solar eclipse recently, except I made the filter area a little larger this time around.

Basically I took an old piece of flat glass and used a BIC butane lighter to put layer after layer of soot on one side of the glass till it was about as dark as welding glasses and viola a solar camera lens filter was born. CAUTION: Do not try this at home. This is a decent emergency camera filter not the best way to view solar events with your own eyes, you should only use special eclipse or welding glasses.

Here on Earth, transits of Venus come in pairs eight years apart, and there is more than a century between each pair. The last Planet Venus transit was in 2004, and the previous pair took place in 1874 and 1882. We are lucky in that we are living in a period of planetary transits and it is one of which I hope to take advantage. Venus's 2012 transit is the last such event until 2117. These images of the 2012 Venus Transit were taken by Tahoe Photographer Walter Baumgarten from Lake Tahoe, CA on June 5, 2012.


Earth and Venus are similar distances from the sun, are made of the same basic materials, and are almost perfect twins in terms of size. Yet the two planets are wrapped in stunningly dissimilar blankets of air. Venus's atmosphere is almost 100 times more massive than Earth's and consists mainly of CO2, a greenhouse gas that raises the surface temperature to almost 900°F. Clouds of sulfuric acid tower 14 miles high and whip around the planet as fast as 220 mph. A human being transported to this hellish environment would be crushed, suffocate, desiccate, and possibly ignite. For the most part, planetary scientists have no idea how Venus turned out this way. "We do not understand why our sister planet's atmosphere evolved to be so different than Earth's," explains planetary scientist Thomas Widemann of the Observatoire de Paris.

We are fortunate enough to be up here in Lake Tahoe and within the view corridor of the solar eclipse on May 20th, 2012. We are staying at the Capri Motel (nice) just a couple of blocks from Lake Tahoe so we walked down to Lakeside Beach by the Lakeside Grill with a friend for a nice view.

We were not the only ones with the idea, there were lots of folks on the beach for the solar event. There seemed to be a bunch of contraptions for eclipse viewing too. From people with box projectors to welding masks, you name it, one guy had a big box on his head?

Apparently it can be tricky and your not supposed to do it, so I can't recommend you try it, but at the last minute I made a filter and it actually worked really good. I took a piece of glass and coated it with layer, after layer, after layer of soot from an ordinary disposable BIC lighter until it was dark, and it worked good enough to get some really wonderful pictures of the Annular solar eclipse from South Lake Tahoe. We shared our homemade with other folks on the beach and they were impressed with the simple DIY filter. 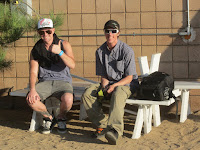 Jack and I really enjoyed the whole event. Hope you enjoy my photos of the eclipse, I used a Canon Powershot SX230 HS for all the annular solar eclipse photos here. It's actually a really amazing camera if you learn how to use it. Thanks to it's powerful 14x optical zoom and shutter priority mode, I also like it for shooting concert photos.

Here we go again. It was Feb. 13th 2012 the night before Valentines Day around 7pm. Jack and I were traveling US 50 on our way back to South Lake Tahoe, CA from Carson City, NV. We were traveling on between the Logan Shoals scenic pull-over and Cave Rock. I noticed a flickering light in the sky to the west. It was flickering and changing colors and it definitely appeared to me that it may have been fluid or non-solid in shape at least. Like an energy field or liquid. Jack snapped off a few photos which I have posted here for you to see. This was definitely not a planet or anything typical.

Check out our other Lake Tahoe UFO photo.

I found the UFO video below on YouTube. It was shot on the same night and time in Oroville, CA of what may be the same UFO. What ever it was that we witnessed was definitely in the direction of Oroville. If you fast forward to 18:10 on the video below, you'll see the flickering and changing colors just as Jack and I saw it that night. In hindsight, I wish we had pulled over and video taped it ourselves. 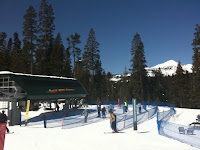 The slopes at Sierra have been really good lately sadly it seemed that with an early Easter last weekend, and a mere 276" of snow to date the resorts were all but over it. So with the ski season quickly coming to an end this weekend it was a shocker when Sierra at Tahoe extended the closing date to the 23rd of April!

With a big winter storm looming on the horizon this is wonderful news as we should be getting the much needed snow it'll take to keep the slopes in good shape till the 23rd of April.

Although this ski season got off to a rather disappointing start this year, the latter part of the season ushered in  more winter storms and excellent powder riding. Check out this video clip of  on a recent Tahoe powder day.

May We Get Snow Please 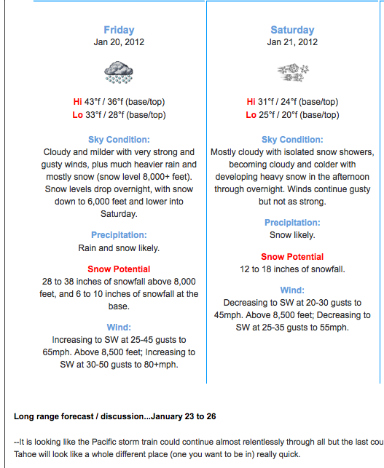 Can I be anymore polite? This is ridiculous, we've had like no snow this winter. It's has been the worst year for snow ever in Tahoe. We got a good storm back in October and we all got excited, but we have not had anything significant since then. Needless to say the lack of snow has been really hard on the entire Tahoe Basin. The Tahoe ski resorts have had very limited terrain open and many workers find their jobs are in a holding pattern until it snows, and you can tell money in town is stretching really thin.

There may be some snow headed our way however, and that would be great news so we're all hoping the weather forecast is correct for later in the week. snowforcast.com is predicting some serious snow for next week, I took a quick screen shot and that's the image ☜ to the left. I really hope we get some snow on these mountains.

Hay, I just found the coolest weather radar image ever. It's from the perspective of looking down on the North Pole from above and you can basically see a good portion of the northern hemisphere at once. It's cool to see how the weather patterns circle the earth, go check it out HERE. It's fun to tinker around with the settings, you can adjust the 6-day radar loop animation speed and add a variety of color enhancements and filters to bring out the conditions.