I got up on the hill this morning hoping the snow would slow down enough to get some sick powder shots.

It never really slowed down. In fact, it started snowing heavier about an hour after we got up this morning.

They did manage to open Grandview which wasn't supposed to open today according to the website.

They got everything open except the backside. So there were lots of fresh tracks to be had.

Here is a video clip of Dwight jumping off the ice cliffs in Avalanche Bowl off Nob Hill chair.

- Posted using BlogPress from my iPhone

Here is a shot of some snowy trees

I got some nice video of my friends spinning off the lip.

This is Dwight and Skyler getting some air.

Powder Skiing at Sierra at Tahoe

Driving up to Sierra was exciting this morning because it was bluebird skies and lots of snow on the trees and rocks alongside Echo Pass.

We started the day on the 6th chair from the front of Grandview chair at Sierra at Tahoe.

Sierra did an awesome job getting everything open right at 9 AM.

The clouds started coming in around noon. You could tell the next storm was on it's way.

There were dark clouds on the horizon when we got to the top of Grandview.

There was over a foot of snow that was light and fluffy with face shots from the powder all day.

Here's the view of Lake Tahoe from gate 2 in Huckleberry Canyon.

- Posted using BlogPress from my iPhone 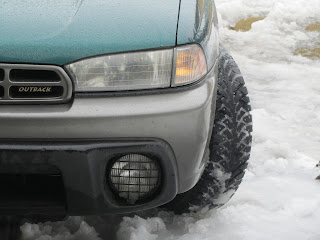 I went online to find out which studded snow tires would be the best choice for our Subaru Outback. After reading some reviews I decided to mount the wheels on the Outback with Nokian Hakkapeliitta 5 Studded Snow Tires. We have been getting lots of snow in Tahoe this season and it's a long potentially snowy drive out to Kirkwood where we are shooting photos this winter. Even on nice days the patches of shade created by trees make dangerous icy spots.
This tire has exceeded my expectations. I have had winter studded snow tires before but these are on another level of performance entirely. Now we don't think twice about heading off into the storm. We just get in and go. The traction during acceleration has improved dramatically on icy roads. Handling and control have also greatly improved. But my biggest shocker was the improvement during braking situations on icy roads, these amazing tires make a phenomenal difference. I could stop much, much better on ice and snow than before, WOW!!! I can stop... Worth mentioning is the performance on wet slushy roads, just superb. It often rains before or after a storm in Tahoe and that makes for slush on the road, the Nokian Hakkapeliitta 5 Studded Snow Tires channel the slush out and away so they are ready for more. You have to try  pretty hard to get these puppies to hydro-plane.
Posted by Unknown at 12/08/2010 06:28:00 PM No comments: Links to this post

Pink Floyd released a double-disc concept record titled "The Wall" in 1979, the year after I graduated from High School. I cranked that politically charged rock album out of my stereo system in my bedroom at full volume nearly everyday. I thought so much of it I purchased a Japanese pressing of The Wall because the Japanese were using 100% virgin vinyl which always sounded better on a nice stereo system. I had a nice stereo system too, a Luxman turntable, running through a Harmon Kardon receiver powering 2 M&K Satellite's and a self powered Miller & Kreisel Volkswoofer.
I thought The Wall was a musical masterpiece unrivaled in the world of rock music. If there was ever an album that deserved an award this was it, I was shocked and disappointed when they gave the 1980 record of the year Emmy to soft rocker newbie "Christopher Cross's "Sailing" album of the year, what a joke. Don't get me wrong it was a nice pop record, and I listened to it, but honestly the Emmy's lost me that year, I confess I no longer respected their decision from that point forward right to this day. Pink Floyd was the certain winner in 1980. In my world the Emmy's blew it.
Pink Floyd brought The Wall live in concert to The USA in February of 1980. They performed 12 shows in the USA, 7 of which were in Los Angeles, CA and 5 shows in Uniondale, New York. I of course was in Chicagoland, about as far as you can get from either location. It was not within my power to get to either performance. It killed me to miss The Wall performed by Pink Floyd in 1980. Then in 1982 Pink Floyd released a full-length movie based on the double record album. The screenplay was written by Roger Waters, Pink Floyd's creative genius/bass player.
When I heard that Roger Waters was taking The Wall on Tour in 2010, I promised myself I would go and experience it live in concert and I did not disappoint. Looking at the Roger Waters 2010 Tour schedule for The Wall, WOW!! This is a very ambitious tour, featuring performances across North America with many cities in the USA and Canada. Which are the closest venues to Tahoe? December 2010 in Oakland and San Jose California. Jack and I decided to catch Roger Waters in Oakland, CA at the Oracle Arena. That way if we broke down or something we had a second chance in San Jose. Jack and I purchased 2 decent tickets online from Ticketmaster a couple of weeks before the Roger Waters concert. I was actually surprised there were tickets available for the show, I was prepared to bite the bullet and go thru StubHub if necessary but we didn't have to do that, we purchased our tickets through TicketMaster the official retail outlet straight up, well for two tickets at least!
We drove down to Oakland from Tahoe  the roads were dry and everything went fine. Jack invited his friend Dwight to go see the Roger Waters Concert so now there were 3 of us and only 2 tickets. Thanks to a terrible traffic jam, we arrived at the Oracle in Oakland 15 minutes before the concert was set to begin. We immediately put our finger in the air signaling others we were in need of a concert ticket and walked to the venue,  on the way we walked past the Roger Waters Entourage. OMG this is the biggest concert production I have ever seen, at least 15 Semi Tractor Trailers and 6 tour buses. I was told they have 2 of these setups 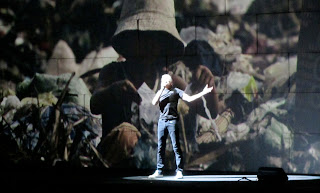 We hopped in line at the Oracle Box Office to buy a ticket for Dwight. As luck would have it, they ran out of tickets like 5 people before us, seriously it sold out right if front of us! We turned around and headed back to the parking lot to see if we could snag a ticket from somebody with an extra. Ticket scalpers suddenly raised their prices to like $250 per ticket because the Roger Waters concert is sold out right. We find a scalper that doesn't know yet it's sold out and he quotes me a $100 bill for a ticket,  hell I think we paid more than that for our  Roger Waters Tickets on Ticketmaster, so I make the ticket scalper promise me this is a good ticket, for what ever that was worth in Oakland California! All I can think is let's make it happen, I wanna go in, like hook me up now, The deal is done and the three of us bolt for the door, tickets in hand. By some miracle the ticket we scored from the scalper works and we race to our seats.
We are just in time for the start of The Wall which immediately captures my full attention with a stunning pyrotechnics and fireworks display. From then on it was an incredibly powerful performance with a not so subtle messages. Throughout the concert workers actually erected a HUGE wall across the Oracle Arena. The wall which went up a little at a time, gradually alienated the audience from the band. The wall was cleverly used as a screen to convey messages, it was awesome! I couldn't believe how many projectors were working in sync to make that work, and it was flawless too, perfectly executed. 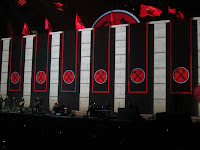 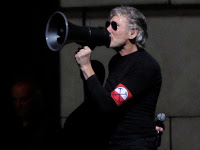 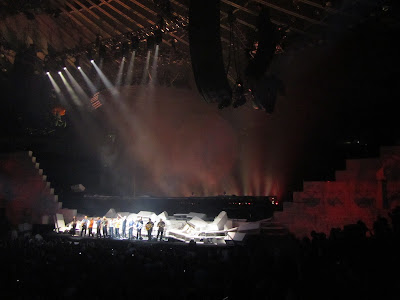 Roger Waters is a brave man and that was more than just an EPIC Concert, it's a not so subtle call for peace and it's not to be missed by the music connoisseur. I hope his message of positivity finds it's way into the hearts of the people in charge of Earth and makes it better for all.

What didn't I like? Here's something I never expected in Oakland of all places. There were a couple of pesky employees working at the concert with a vengeance for pot smokers. They were on the lookout and when they spotted somebody allegedly smoking pot in our section they made a big scene by calling the cops and having the people kicked out of the show every time. It never happened to us but it happened a few times. Is this anyway to treat people who spent around $250 each for tickets in this section? NO WTF Oakland that's ridiculous.  I'll never go to the Oracle again. Each time we were totally disrupted because these employees and cops were yelling at nice at what looked like nice folks and standing in front of our view of the stage and pointing large flashlights at everybody. It could have been part of the show where Roger sings "there's one smoking a joint and another with spots, if I had my way I'd have all of them shot" these staff were looking for problems, but it was real bad and it spoiled an otherwise perfect night.
Posted by Unknown at 12/03/2010 11:32:00 PM No comments: Links to this post