We are in Berkeley, CA for the Phish concert at the Greek Theatre. We had so much to do in Tahoe we got out of town later than we wanted to. We arrived in Berkeley just in the nick of time for the 6:30 Phish concert. We paid $20 to park quick and rode to the venue on our bikes. Jack hooked up Dwight with his ticket so he and I went in to see Phish. 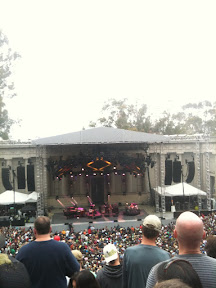 The concert was good. Apparently Trey got a new guitar and tonight was the first gig he played it at.